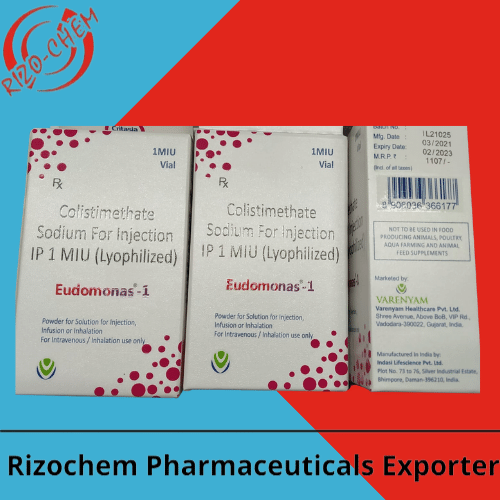 The antibiotic colistimethate belongs to what class?

Colistin, a polymyxin antibiotic, is used to treat bacterial infections caused by susceptible Gram negative bacteria. Bacillus colistinus produces cyclic polypeptides that are antimicrobial. This molecule is composed of polymyxins E1 and E2, also known as Colistins A, B, and C, which are cell membrane cleaners.

Colistin is a potent antibiotic, right?

The antibiotic colistin has been used successfully to treat infections caused by the Pseudomonas, Escherichia, and Klebsiella species. The data below shows the minimum inhibitory concentration (MIC) susceptibility data for a select group of therapeutically relevant bacteria: 0.12-128 g/ml for Escherichia coli.

What Colistimethate Sodium Injection 1MIU side effects are there?

When does Colistimethate Sodium Injection 1MIU start to work?

Without a loading dose, it can take two to three days to attain appropriate colistin concentrations since the prodrug (CMS) converts slowly to the active drug. (colistin) and the lengthy half-life of colistin (roughly 14.4 hours); the administration of a loading dose may shorten the time to reach the target.

Colistimethate Sodium Injection 1MIU is used to treat what types of infections?

Colistimethate Sodium Injection 1MIU is it a steroid?

The medications colistin and neomycin work to kill germs. A steroid is hydrocortisone. It lessens the effects of bodily substances that trigger inflammation. It is a wetting agent, thonzonium.

Colistin overdose may result in neuromuscular side effects include ataxia, which impairs balance, coordination, and speech, as well as paresthesia, which causes strange skin sensations, lethargy, disorientation, and confusion. Acute renal failure, respiratory paralysis, and death can result from a severe overdose.

What if colistin is ineffective?

Bacteria that are already resistant to all other antibiotics could produce diseases that are genuinely incurable if colistin resistance spreads to those bacteria. Bacteria will undoubtedly find ways to withstand the antibiotics that humans have devised since we cannot stop them from evolving.

We are a regular distributor, a supplier based in India, and an exporter with operations in more than five foreign countries, including the UAE, South Africa, Indonesia, Egypt, USA, etc. In the unlikely occasion if you’re looking for a product or brand, Click here.