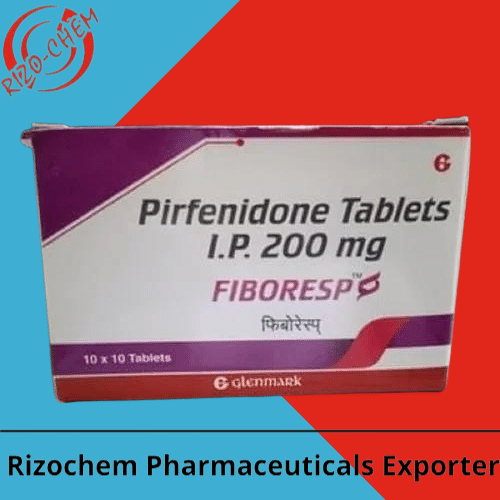 What is the purpose of a Pirfenidone Tablets 200mg Fiboresp?

To treat idiopathic pulmonary fibrosis, Pirfenidone Tablets 200mg Fiboresp is utilised.To buy this drug, all you need is a prescription from your doctor. There are several dosing formulations for this product: Capsule.

What is 200Mg of pirfenidone?

Idiopathic pulmonary fibrosis is a specific lung condition that is treated with pirfenidone (IPF). This illness makes breathing difficult by causing the lungs to scar and stiffen. Pirfenidone could be able to stop your IPF from getting worse.

What purpose does Pirfenex 200Mg serve?

Idiopathic pulmonary fibrosis (IPF) in adults is treated with the anti-fibrotic drug Pirfenex 200Mg Tablet 15’S. Lung function gradually deteriorates as a result of the irreversible disease known as IPF. Over time, the tissues of the lungs swell and scar, making it more difficult to breathe deeply.

What are the adverse effects of Pirfenidone Tablets 200mg Fiboresp?

How much Pirfenidone Tablets 200mg Fiboresp should I take?

Three capsules per day may be the lower limit for the pirfenidone dosage (one capsule three times a day). Pirfenidone should be stopped taking for 15 days and then resumed at the recommended daily dose over the course of two weeks if the rash doesn’t go away after 7 days.

Pirfenidone consumption is linked to a survival advantage, according to a new study. The scientists noted that IPF patients receiving the finest supportive care have a 2.47-year shorter life expectancy than individuals receiving pirfenidone treatment.

Pirfenidone is an antibiotic, right?

For the treatment of mild to moderate idiopathic pulmonary fibrosis, the FDA authorised the novel antifibrotic medication pirfenidone in 2014. (IPF).

Is pirfenidone harmful to the liver?

It is well known that pirfenidone frequently elevates the liver transaminases (ALT and AST), with sometimes concurrent elevations in bilirubin.

How should Pirfenidone be taken?

Follow your doctor’s instructions and take this medication by mouth with food up to three times daily. Pirfenidone may lessen nausea and vertigo if taken with food. To reduce the chance of adverse effects, your doctor might suggest that you start this medication at a low dose and gradually increase it.

Fibrosis: Can pirfenidone treat it?

Pirfenidone, an antifibrotic medication, reduces the progression of idiopathic pulmonary fibrosis (IPF) over the course of a year, but there is less information on the reduction in lung function and overall survival (OS) in cohorts with extended follow-up in the real world.