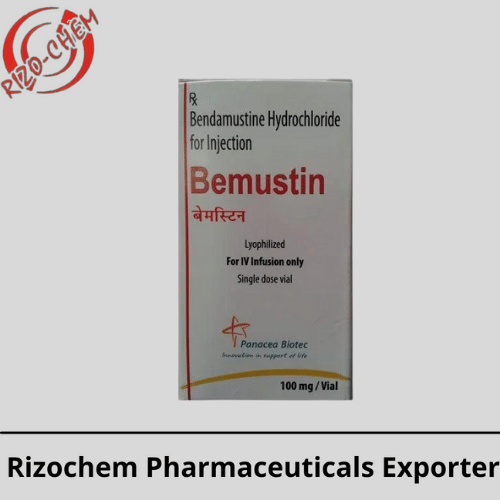 What is Bendamustine Injection used for?

The injectable Bendamustine Injection is used to treat chronic lymphocytic leukaemia (CLL) (CLL; a type of cancer of the white blood cells).

Bendamustine is administered in the following ways: As an intravenous injection (intravenous, IV). Bendamustine does not come in tablet form. Bendamustine dosage is determined by a number of criteria, including your height and weight, general health or other health issues, and the type of cancer or illness being treated.

Will I lose my hair on bendamustine?

Bendamustine is given in the following ways: As a vein injection (intravenous, IV). Bendamustine is not available in tablet form. Bendamustine dosage is determined by several criteria, including your height and weight, general health or other health issues, and the type of cancer or illness being treated.

How do you feel after bendamustine?

How do bendamustine and rituximab work?

Rituximab is an antibody that targets and binds to a protein found on the surface of malignant b-cells. When rituximab binds to this protein, your immune system is aided in the destruction of the cancer cell. Bendamustine is a drug that is used to kill cells that divide quickly, such as malignant lymphocyte cells.

People who take this medicine have experienced heart complications such as heart failure. This has sometimes resulted in death. If you develop chest pain or pressure, an irregular heartbeat, shortness of breath, a significant weight gain, or swelling in your arms or legs, call your doctor straight once. To know more click here.

Weakness and exhaustion
During your treatment, you may become extremely exhausted. After the treatment, it may take 6 months to a year for your energy levels to return to normal. You will feel tired if your red blood cell count is low. You can aid yourself by doing things like mild exercise.

How often is bendamustine given?

Bendamustine is administered as an intravenous infusion. This injection will be given to you by a healthcare provider. Every 21 to 28 days, bendamustine is commonly taken for two days in succession. Your doctor will decide how long you will be treated with this medication.

Does bendamustine cause weight gain?

If you have a decrease or change in the amount of urine you produce, joint pain, stiffness, or swelling, lower back, side, or stomach pain, rapid weight gain, swelling of the feet or lower legs, or unusual weariness or weakness, call your doctor straight once.

By disrupting DNA, this sort of treatment destroys both cancer cells and healthy ones. As a result, treatment with bendamustine may result in secondary malignancies, which occur in 4% of individuals. This, as well as other long-term negative effects of bendamustine treatment, is still being researched.

Bendamustine is known to cause rash, itching, fever, and chills in some people. This is usually not a serious reaction.

Does bendamustine cause diarrhoea?

Nausea, vomiting, diarrhoea, exhaustion, headache, disorientation, weakness, or mouth sores are all possible side effects. Tell your doctor or pharmacist right once if these effects continue or worsen. This medicine may cause major negative effects in those who take it.