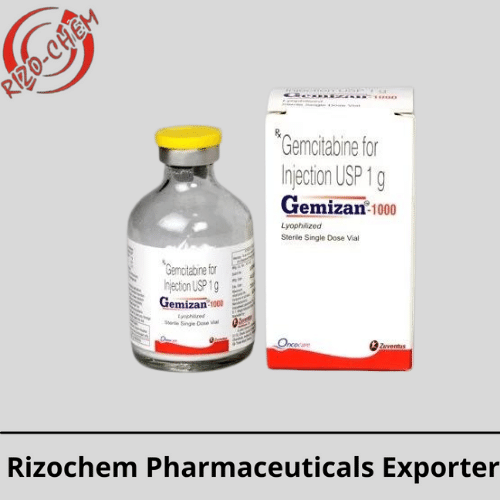 What is Gemcitabine Injection 1000 mg used to treat?

Gemcitabine Injection 1000 mg is a chemotherapeutic medicine that is used to treat a variety of cancers, including bladder and breast cancer, among others.

When used in conjunction with cisplatin, Gemizan is used to treat a kind of lung cancer called non-small cell lung cancer (NSCLC), which has spread to other parts of the body and cannot be treated surgically.

In addition, Gemizan injection is used to treat pancreatic cancer that has progressed or spread to other regions of the body in individuals who have previously received fluorouracil treatment. Oncogenic cells are prevented from growing and eventually die as a result of Gemizan.

Even though additional comparisons with different chemotherapy regimens are needed, Gemizan looks to be well tolerated. According to the available evidence, gemcitabine monotherapy is more well-tolerated than cisplatin plus etoposide in patients with non-small cell lung cancer. To know more click here.

How long can Gemizan last?

A cycle (dose) of gemcitabine in combination with paclitaxel lasts for 21 consecutive days. On the first and eighth days of the cycle, Gemizan is administered. The period that elapses between each cycle of treatment allows your body to recuperate.

What cancers are treated with Gemizan?

Gemizan, a pyrimidine nucleoside antimetabolite, is considered to be one of the most promising new cytotoxic drugs currently available. The medicine has demonstrated activity in a number of solid tumours, and it has been licensed for the treatment of non-small cell lung cancer, pancreatic cancer, bladder cancer, and breast cancer, among other cancers of the breast and bladder.

Does Gemizan weaken the immune system?

Because Gemizan does not appear to impair particular anticancer cellular immunity, it may be beneficial in combined chemo-immunotherapy regimens. Immunization methods that require a humoral immune response for maximum efficacy, on the other hand, may be jeopardized in individuals who are receiving Gemizan treatment.

Does Gemizan cause hair loss?

v Although Gemizan is generally associated with modest hair loss, some patients may experience more hair loss than others. Following the completion of treatment, hair growth should resume. v Although nausea and vomiting are not uncommon, they are less common today than they were in the past due to the development of significantly improved anti-nausea drugs.