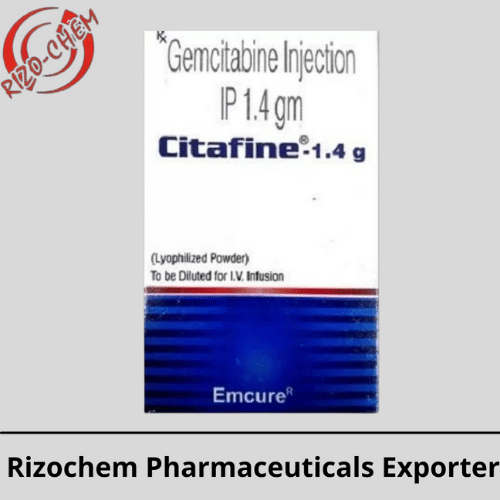 What is Gemcitabine 1.4gm injection and how does it work?

For example, Gemcitabine 1.4gm injection is used in combination with other medicines (e.g., carboplatin) to treat patients with advanced ovarian cancer that has returned following therapy with other cancer treatments for at least 6 months (platinum-based).

What is the best way to administer a gemcitabine injection?

What is the process for making Gemcitabine 1.4gm?

Withdrawing the entire contents of the vial will yield 200 mg or 1 g of gemcitabine, respectively. The required amount of medication can be given as is or diluted further with 0.9 per cent Sodium Chloride Injection to concentrations as low as 0.1 mg/mL. Allow 30 minutes for the infusion.

What are the adverse effects of gemcitabine 1.4gm citafine injection?

How effective is Gemcitabine 1.4gm?

Gemcitabine 1.4gm is used to treat a variety of malignancies.

One of the most promising new cytotoxic agents is gemcitabine, a pyrimidine nucleoside antimetabolite. The medicine has been licenced for the treatment of non-small cell lung cancer, pancreatic cancer, bladder cancer, and breast cancer, and has shown activity in a range of solid tumours.

What is the maximum amount of time you can take gemcitabine?

How long does it take to get treatment? A gemcitabine cycle (dose) with paclitaxel lasts 21 days. On days one and eight of the cycle, gemcitabine is given. The period between each treatment cycle allows your body to heal.

What is the function of gemcitabine?

Gemcitabine is a drug used in conjunction with cisplatin to treat a kind of lung cancer called non-small cell lung cancer (NSCLC) that has spread to other parts of the body and is resistant to surgery.

Is gemcitabine considered a prodrug?

Gemcitabine is a cytidine analogue in which the hydroxyl on the ribose is replaced by two fluorine atoms. Gemcitabine is a prodrug that is converted into active metabolites that stop tumour development and promote apoptosis in malignant cells by substituting the building blocks of nucleic acids during DNA elongation.

What is gemcitabine’s mode of action?

The suppression of DNA synthesis is gemcitabine’s most essential mode of action (Huang et al., 1991). When dFdCTP is incorporated into DNA, it is followed by a single deoxynucleotide, preventing chain elongation.

If you are looking for another product or brand click on our products.