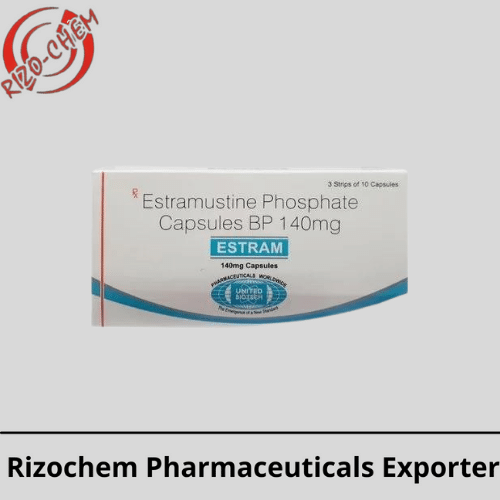 What is Estramustine 140mg Capsule used for?

Estramustine 140mg Capsule is used to treat prostate cancer that has progressed to other places of the body or has worsened. Estramustine belongs to the antimicrotubule agent class of drugs. It works by halting the growth and spread of cancer cells.

Is it estramustine chemotherapy?

What is the mechanism of action of estramustine?

Estradiol and nitrogen mustard are combined in estramustine. The nitrogen-mustard moiety becomes active in vivo and participates in DNA or other cellular components alkylation. This produces DNA damage in malignant cells that are rapidly dividing, resulting in cell death and, ideally, tumour reduction.

What drug is EMP?

Estramustine phosphate (EMP) is a dual oestrogen and chemotherapeutic medication used to treat prostate cancer in men. It is also known as estradiol normustine phosphate and is marketed as Emcyt and Estracyt. It’s administered multiple times a day by mouth or as an injection into a vein.

Can exemestane cause weight gain?

When Aromasin was used to treat advanced breast cancer in tests, it caused weight gain. You should not stop taking Aromasin if you gain weight while taking it. Instead, consult your physician. They can advise you on how to stay at a healthy weight while in your therapy.

Why does exemestane cause weight gain?

Aromatase inhibitors (such as anastrozole) can potentially cause weight gain by counteracting estrogen’s effects. Lipoprotein lipase (LPL) is an enzyme that lies on the surface of cells and takes fat out of the bloodstream. It stores fat in the cell of muscle cell, where it is used as fuel. To know more click here.

What are the benefits of taking exemestane?

Exemestane, a synthetic steroid widely prescribed to combat estrogen-dependent breast cancers, not only inhibits oestrogen production but also appears to protect cells throughout the body from damage caused by UV radiation, inflammation, and other assaults, according to the findings of a study published in the journal.

Can you take vitamins with exemestane?

No known interactions exist between exemestane and vitamin D3. This isn’t to say that interactions aren’t possible. If at all feasible, seek medical advice from a qualified professional.