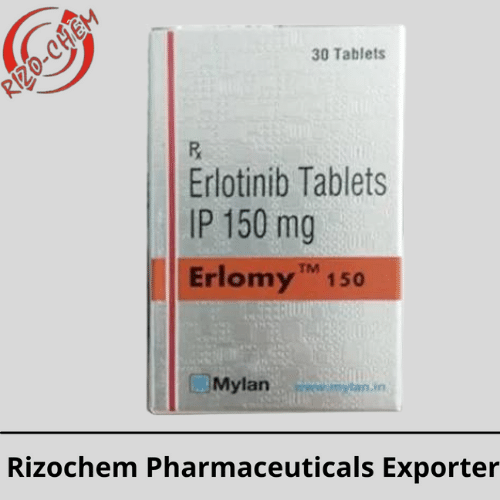 What are the benefits of using Erlotinib 150mg Tablet Erlomy?

Erlotinib 150mg Tablet Erlomy is a drug that is used to treat non-small cell lung cancer that has progressed to surrounding tissues or other sections of the body in patients who have had at least one other chemotherapy medication and have not improved.

How long does Erlomy take to take effect?

In the fraction of individuals with EGFR mutations, erlotinib is quite successful. However, after around 12 months of erlotinib therapy, even these patients will begin to show signs of cancer progression.

What are the erlotinib side effects?

Is erlotinib a type of chemotherapy?

Erlotinib is a non-chemotherapy medicine that is used once a day for the treatment of advanced or metastatic NSCLC. It successfully inhibits EGFR, a protein that plays a role in cancer growth and development.

What are the symptoms of erlotinib rash, and how do you treat them?

Topical steroids (at least strong class) combined with emollients are the foundation of treatment for the most prevalent skin problems linked to erlotinib–acneiform rash, xeroderma, pruritus, and paronychia.

When did erlotinib get its approval?

Conclusions: The FDA approved erlotinib for the treatment of patients with locally advanced or metastatic NSCLC who had failed at least one prior chemotherapy regimen on November 18, 2004.

Why do people develop erlotinib resistance?

When using erlotinib, this usually happens 8–12 months after starting treatment. A mutation in the ATP binding site of the EGFR kinase domain, which involves the replacement of a tiny polar threonine residue with a large nonpolar methionine residue, is responsible for over 50% of resistance (T790M).

Is it true that erlotinib is cytotoxic?

Erlotinib is given in a number of ways.

The daily dose of TARCEVA for NSCLC is 150 mg, administered on an empty stomach at least one hour before or two hours after eating. The treatment should be continued until the disease progresses or there is intolerable toxicity.