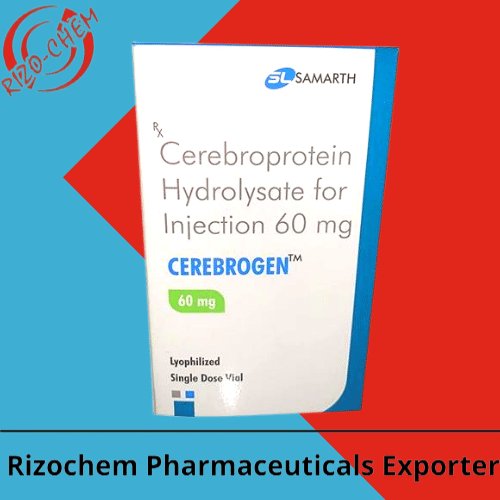 An extract from pig brain tissue called Cerebroprotein Hydrolysate Injection 60mg has a variety of effects on the central nervous system, including protecting neurons and enhancing memory, attention, and vigilance.

How is a Cognistar injection administered?

Self-administration of Cognistar 60 Injection, which is administered as an injection under a doctor’s supervision, is not advised. It is administered if oral delivery is not possible.

How does cerebral protein function?

What are the adverse effects of a Cerebroprotein Hydrolysate Injection 60mg hydrolysate?

What effect does Cerebroprotein Hydrolysate Injection 60mg have?

Abstract. The medication called Cerebrolysin contains peptides that were taken from a pig’s brain. It is applied in neurological practise to help dementia patients and stroke patients recover.

What is an injection of Cerebroprotein Hydrolysate Injection 60mg?

Alzheimer’s disease, stroke, and brain traumas can all be treated using a medication called cerebrallysin injection. Depending on the illness it is being used to treat, it may be taken either alone or in conjunction with other medications.

What use does Cerebroprotein Hydrolysate Injection 60mg serve?

Amyotrophic lateral sclerosis, often known as Lou Gehrig’s disease or ALS, is a condition in which the nerves that regulate muscle action slowly deteriorate, causing the muscles to contract and weaken. Edaravone injection is used to treat this ailment. Edaravone injection belongs to the group of drugs known as antioxidants.

Piracetam is most frequently prescribed for breath-holding episodes, epilepsy, vertigo, dyslexia, a learning disability characterised by reading difficulties, and a movement issue frequently brought on by antipsychotic medications (tardive dyskinesia).

Once everyday for 30 days, cerebrallysin was injected intramuscularly (IM) for more than 5 minutes into the gluteus maximus, quadriceps, or deltoid.

What class of medication is cerebrallysin?

We are a regular distributor, a supplier based in India, and an exporter with operations in more than five foreign countries, including the Oman, Ausrtalia,New Zealand Egypt, UAE, etc. In the unlikely occasion if you’re looking for a product or brand, Click here.