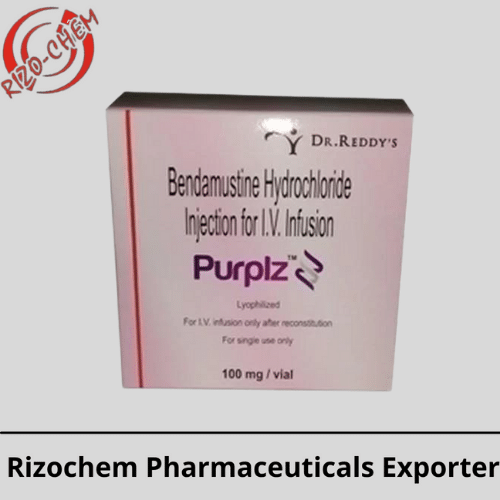 This drug is used to treat a variety of cancers (such as lymphoma, chronic lymphocytic leukaemia – CLL). Bendamustine 100mg Injection Purplz is an alkylating agent, which is a type of cancer chemotherapeutic medication. It acts by either destroying or delaying the growth of cancer cells.

Bendamustine is administered as an intravenous infusion. This injection will be given to you by a healthcare provider. Every 21 to 28 days, bendamustine is commonly taken for two days in succession.

During your treatment, you may become extremely exhausted. After the treatment, it may take 6 months to a year for your energy levels to return to normal. You will feel fatigued if your red blood cell count is low. You can aid yourself by doing things like mild exercise.

Will I lose my hair with bendamustine?

Bendamustine is known to cause rash, itching, fever, and chills in some people. This is usually not a serious reaction.

Can you drink alcohol while taking bendamustine?

Alcohol use (in tiny doses) appears to have no effect on the safety or effectiveness of bendamustine. Bendamustine has been linked to sterility in men. If you plan to have children, talk to your doctor before starting bendamustine treatment.

Does bendamustine cause neuropathy?

Of course, bendamustine does not cause substantial cardiac, renal, or hepatic toxicity, alopecia does not occur, and neuropathy is uncommon: all of these side effects have been observed by R-CHOP researchers. To know more click here.

What drug class is bendamustine?

Bendamustine belongs to the alkylating agent class of drugs. It works by eliminating existing cancer cells and stopping new cancer cells from growing.

Is bendamustine used for multiple myeloma?

Bendamustine, as a single drug or in combination, is a therapy option for individuals with relapsed and refractory multiple myeloma because of its minimal toxicity.

Is bendamustine an irritant?

Bendamustine has been found in multiple drug databases as an irritant with vesicant-like characteristics. Some sources classify it as an irritant, but the ESMO-EONS 2012 guideline classifies it as a vesicant.

Does bendamustine cause low blood pressure?

Loss of weight. Rashes, low blood pressure, wheezing, shortness of breath, and swelling of the face or throat are all symptoms of an allergic reaction.

Does bendamustine cross the blood-brain barrier?